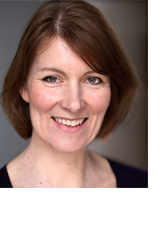 Julie is a graduate at The Webber Douglas Academy of Dramatic Art..

She started off in repertory theatre in Dundee in Bernard Shaw’s classic You Never Can Tell, swiftly followed by seasons at the Bristol Old Vic, York Theatre Royal, Liverpool Playhouse and many more. Extensive national tours have been a joy, exploring many cities and towns up and down the UK. Accompanying me on these tours was my dog, Lucy, a rescue dog and a wedding gift from my husband. Lucy even played Montmorency in Three Men In a Boat; she behaved impeccably for one show a day but was clearly bored when required to do two!.

Her favourite roles include Myra Arundel in Hay Fever, Paulina in Death and the Maiden, Lady Macbeth, Simpson in Tons of Money, Lizzie in Taking Steps, Mrs Norris in Mansfield Park and most recently Aunt Jane in Lady Anna all at Sea, an Anthony Trollope adaptation which having played at The Park Theatre in London last autumn embarks on a short tour in June..

Julie also had a very busy audio career. Radio plays, dubbing films and commercials but predominantly recording audio books which she loves. Narrating the whole book and playing all the characters is a great challenge and, as Julie says, “I get to play parts I would never be cast in!”