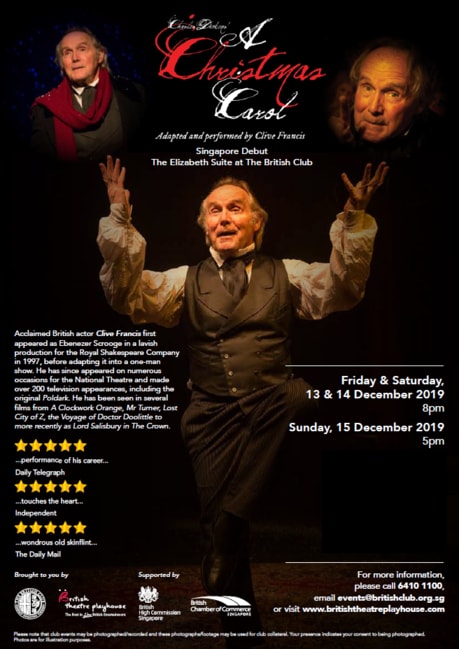 Singapore is given a Christmas surprise - the British Theatre Playhouse and The British Club are set to bring out from London, Clive Francis in his one- man presentation of, A CHRISTMAS CAROL, to be held in the Elizabeth Suite of The British Club.

This classic festive story written by the distinguished writer, Charles Dickens, (Oliver Twist, David Copperfield, A Tale of Two Cities, to name but a few!) features the miserly, misanthropic, Ebenezer Scrooge, brought to life in this much-acclaimed performance by the stage, television and film actor Clive Francis - Spellbinding! The Sunday Times.

Ebenezer Scrooge is a cold-hearted miser who despises Christmas, and all that it stands for. He is a squeezing, wrenching, grasping, covetous old sinner! But on Christmas Eve he is visited by the ghost of his old business partner, Jacob Marley, who warns him that in order to repent his wicked ways, Scrooge will be visited by three spirits; the ghosts of Christmas Past, Present and Future. What follows is a nightmarish journey of discovery.

There will be an aftershow party at 9.15pm to meet actor Clive Francis over drinks & light buffet dinner

There will be an aftershow party at 9.15pm to meet actor Clive Francis over drinks & light buffet dinner

A sleight of hand in which, before our very eyes, he fills an empty stage with an entire Dickensian landscape”

Clive Francis is spellbinding. He singlehandedly recreates an entire Dickens novel. By turns gripping, mesmerising, haunting and very movingly he manages in 70 enthralling minutes to construct a whimsical kind of masque. Like a solitary Beckett character, he makes us believe in whatever scene Dickens conjures up, whether its Scrooge on his own in his house or with Bob Cratchit in the office, or watching scenes from past, present and future with the spirit of Christmas, it is all done so convincingly that we willingly suspend our disbelief. It’s a marvellous achievement. It’s the nearest any of us will get to experiencing Dickens read A Christmas Carol
John O’Brien, LondonTheatre1.com

…performance of his career…
Daily Telegraph 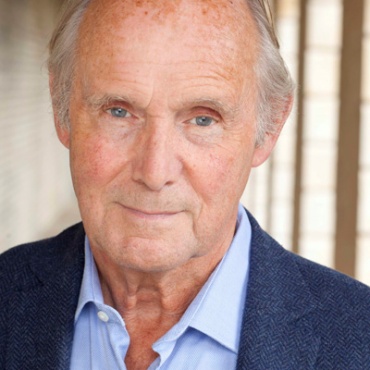