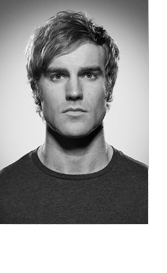 James Cartwright is acknowledged as one of the finest young British actors of his generation.

He has appeared in several Royal National Theatre productions as well as starring in the BBCTV series “Johnny Shakespeare” and “Holby City”.

In London’s West End he starred in ”The Rise and Fall of Little Voice” at the Vaudeville Thetare, a play written by his father the playwright, Jim Cartwright.

James returns to the British Theatre Playhouse in the role of “Tom Veryan” in Noel Coward’s classic play “The Vortex”.